2017 is almost half over and it’s time for the midyear fitness report! Actually, this is a bit early, but I need to report now because it is the last week of school for our kid. Once he’s out of school, I won’t be able to exercise as regularly. I’ll try my best, but I know I’ll only be able to work out occasionally. Okay, let’s go over my fitness goals this year and see how I’ve done so far. 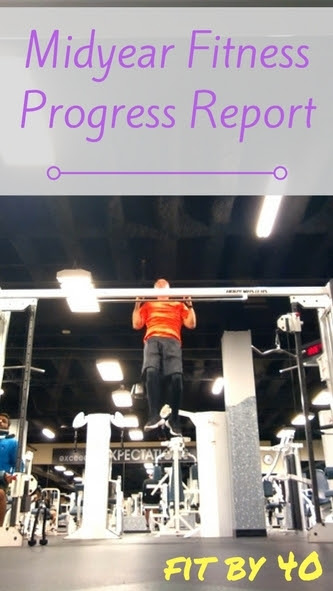 I got a Garmin Vivofit2 in 2015 and I’ve been wearing it ever since. This is the easy way to track my steps and sleep pattern. The best thing I like about it is that I don’t have to recharge it. The Vivofit uses a watch battery and you just put in a new battery when the power runs out. I can just leave it on my wrist 24/7. Also, it’s cheaper than the Fitbit so that’s a nice bonus. 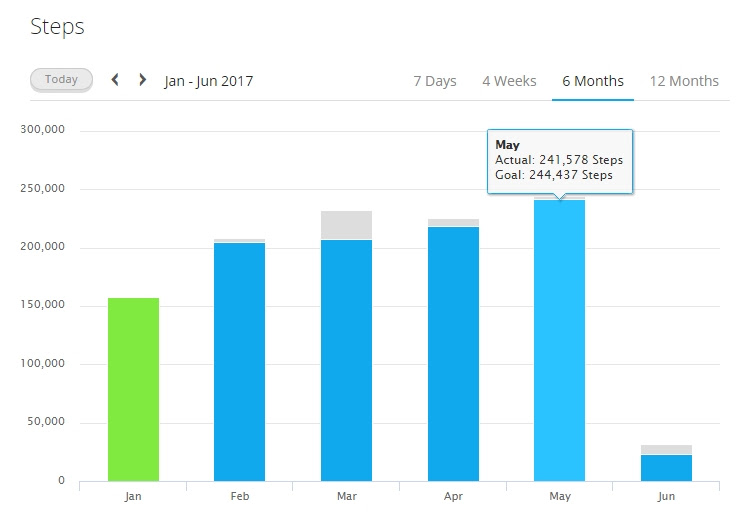 Anyway, I’ve been doing pretty well in 2017. I averaged about 7,800 steps per day in May. That’ll work. If we look at the first 5 months, I’m a bit short of 7,000 steps per day. We had more snow than usual in January so I didn’t get out as much as I’d like. We can see the steps increasing as the weather warm up. That’s nice and maybe I’ll make up for January by walking more in the summer.

I did 19 pull ups! My form was pretty good for the most part and I’m quite happy with this result. Check out the video below. Not too shabby for a 43 years old guy.

My original goal was 15 pull ups because I didn’t think I could do 20. It’s turning out pretty well so I changed the goal to 20.

I followed the Armstrong Pull Up program for 3 months. It increased my pull ups, but I got stuck at around 15 repetitions. After a few weeks without much progress, I added weight once per week. I think this helped a lot and my numbers started increasing again. A couple of weeks ago, I added negative one arm pull ups and it was disastrous. I only did a few, but they injured my elbows. Now, I can’t workout hard for a couple of weeks. Oh well, live and learn. No more negative one arm pull ups. It’s just too much stress on my elbows. I’ll have to be content with two arms pull ups.

3. Exercise when the kid goes to school

This one turned out very well. I worked out almost every day when my kid is in school. I think I only missed one day due to sickness and 3 days due to schedule conflict. Overall, this system worked out extremely well. It’s going to be tough this summer, though. I’m going to sign our kid up for half day summer camps every other week. This is barely enough time for me to work on my blog and I might not have enough time for the gym. We’ll see how it goes.

Overall, the first half of 2017 was great. I was more active than last year and I made it to the gym on a regular basis. One important lesson I learned is that it’s a lot easier to exercise 5 times per week than 3. You just build it into your schedule and don’t deviate from that. There are too many things that can go wrong when you plan for 3x per week.

How are you doing with your fitness in 2017 so far? I hope you’re keeping active. Have a great summer and good luck in the 2nd half of 2017!

This site uses Akismet to reduce spam. Learn how your comment data is processed.

Previous post: Exercising When Kids Are Out of School