When The Universe Conspires Against Going to The Gym

Ugh! The gym is closed. Do you ever get the feeling the universe is conspiring against you? That’s how I feel this week about getting fit. On Tuesday, I was almost done with my workout when the fire alarm sounded. I quickly grabbed my jacket and left. I know you’re supposed to get out as fast as possible, but the locker was in the open gym area and the fire exit was very close by. Also, I didn’t see any fire or smell any smoke. I figured it was a random fire drill. My workout was pretty much done so I was good to go. 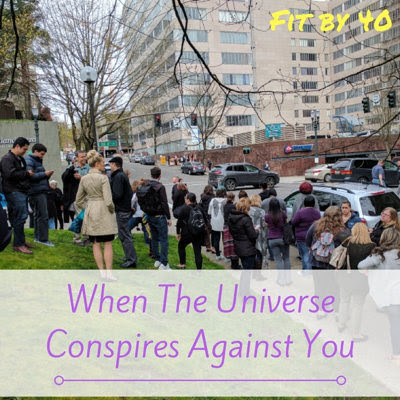 I quickly left and walked home without looking around much. Everyone was streaming out of the building and I didn’t want to be caught up with the crowd. Surprisingly, this alarm turned out to be a much bigger deal that I first thought. Later, my mom came home and told me the streets were closed and there were a bunch of people milling around. There were police cars, fire trucks, an ambulance, and helicopters everywhere. Whoa, that’s big news, so we checked the TV.

It turns out that the side of the building was bulging and the facade was falling down. Here are an image from the local media outlet. 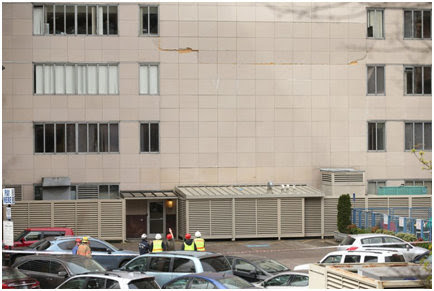 The authorities evacuated everyone within two-block radius because they weren’t sure if this was a structural problem or not. Luckily, nobody was hurt. The area below the façade is the playground for a daycare. I was working out right below that in the underground level.

Anyway, the problem was limited to the exterior façade. However, the building remains close until further notice. If you didn’t get your wallet out, then tough luck! Well, I think they let people in to grab their stuff quickly around 3pm. Oh man, I am so glad I got my stuff before I left. Some people just walked out with their workout clothes on. I’d hate to stand around for hours in just shorts and t-shirt.

So the building is closed until at least Monday, but I still want to go work out. My routine is to go 5 days per week! I don’t want to deviate from this because it can be a slippery slope. Anyway, I know there is another  24 Hour Fitness on the north side of downtown so that’s where I went on Wednesday. However, I got there and there was no available (free) parking. I had to pay $2 per hour to park so I could go workout. WTF!

Previously, there was a garage that we could use if we’re going to the gym, but the lease was canceled. That building was sold recently. I’m sure 24 Hour Fitness HQ won’t complain about that either. I imagine it’s not cheap to lease a garage and hire a security guard to watch the cars. Now the gym goers can pay $2 per hour and take their chances on the street. That area is a lot nicer now. There are only a few homeless people there. So the cars should be relatively safe. Oh, there is a small parking area out front, but I can’t wait for a spot to open up. I got stuff to do!

So on Thursday, I decided to work out at home instead. I did 100 pushups, bodyweight squats, shoulder raises, overhead presses, and jumping jacks. Whew, that actually took a lot out of me. I used my mom’s 5 lbs dumbbells for the raise and press. I probably should get some more weights in case this happens again, now I have to think of storage and where to put them. This is okay for a day or two, but I prefer to go to the gym. That’s where I work out best. I know I can’t stick to this home workout routine.

There are other 24 Hour Fitness Centers relatively nearby, but they are all super sports level. Normally, I wouldn’t be able to go there because I have the regular membership. However, I just called and they said come on in. I’ll check them out tomorrow. This is acceptable, but it is still messing up my daily routine. I want to walk to the gym, not drive there.

Okay, my complaint is petering out. The universe is conspiring to stop me from working out, but I’ll adapt for a few days. Hopefully, my regular gym will open next Monday. I like walking to the gym and getting my steps in. That’s two birds with one stone.

What about you? Do you ever feel like the universe is conspiring to stop you from getting fit?

This site uses Akismet to reduce spam. Learn how your comment data is processed.

Next post: It’s Time to Get Lean for the Summer

Previous post: Getting Back into The Gym After A Week Off